The Difference Between a Bong and a Water Pipe

Imagine being an artist and someone comes along and says “Hey dude, I really dig your finger paintings.” You would be offended, right? Especially if you worked with expensive oils. Well, the same holds true for glass artists too. The word bong is a term that was used by hippies in the Haight-Ashbury period in the late 1960s, which simply described a tube with a sealed bottom that held water. When the 1970s came around, the Cheech and Chong movies made the word “bong” universal among the stoner crowd. However, as we progress into the new millennium, technology allowed for more artistic expression when it comes to smoking paraphernalia and bong has become somewhat a dirty word. 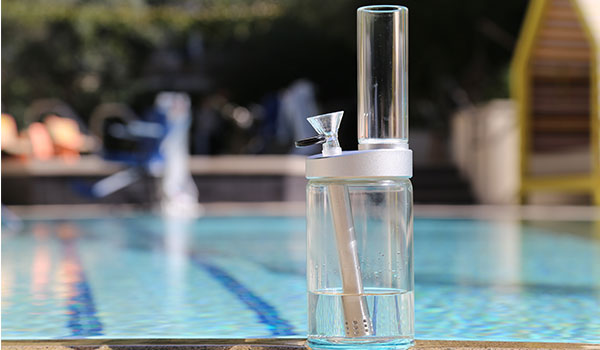 Let’s Break Down the Word Bong

Simply put, a bong is a tube 1 to 3-inches in diameter and sealed to hold water. Nothing fancy -- it can be made from a gourd, bamboo, acrylic, metal, wood, or even glass. Most bongs are straight tubes. So when you lit the bowl, it was a good chance you would singe your eyebrows off, or worse catch your hair on fire! The design of a bong is simple with an attached downstem that reached the bottom of the tube. You hit a bong at the top of the bong tube, drawing the smoke through the bowl and down stem into the water. The smoke cools and rises through bubbles into the empty bong chamber above the water, filling with smoke. 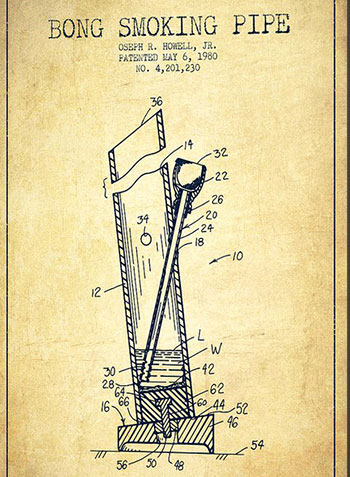 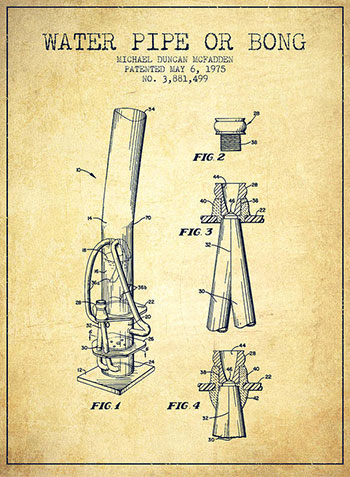 Anatomy of a Water Pipe

Although bong and water pipe are synonymous, there are a few key factor that make them widely different. When you look at the diagram of a bong, you see a simple design of a straight tube and a stem. Nothing much goes into making a bong. On the flip-side, however, a water pipe can be created to include multiple percs, several chamber and tiers, can come in a straight-tube, beaker, or even a zig-zag design. There is truly an art to creating a water pipe, whether it's mass produced or a one-of-a-kind piece. Yes, it holds water like a bong, but in essence it is the way the smoke gets circulated. With a bong, you get a straight shot to the lungs and no mercy when it comes to coughing fits. A water pipe is more sophisticated. There is a lot of the thought the goes into the overall shape and how the smoke feels as you inhale. A water pipe also enhances the flavor of your flower or concentrates. Creators of water pipes also look at features such as ergonomics. Will the pipe tip over at the slightest touch? Can the water pipe be shared with ease? Will the water pipe provide powerful hits that won't hurt your lungs? So much thought goes into a water pipe.

When it comes to smoking, a water pipe can also serve as a communion. It's a conversation piece, where your friends can watch in amazement as the smoke gets filtered through tiny bubbles and move its way through the percs. A water pipe has the potential for creating memorable experiences among friends or even if you're alone in a meditative state.  A bong--well it's just blah!

Here at Cloud 9 Smoke Co. we look at every aspect of a water pipe. How does the water pipe make you feel? How does the water pipe perform? But most important, how a water pipe can have a dual function as art piece and smoking piece. Sure, this is all just semantics, but bong just takes us down the path of the 1970's where Cheech and Chong are heading down the road in their convertible low-rider, chugging on a piece of shit acrylic tube with metal stem and bowl and choking on the remnants of some dirt weed.

We’ve come a long way since the summer of love days of hippies passing around plastic tubes and metal pipes filled with dank water. Now, the glass water pipe market is very much its own niche with collectors clamoring to get their hands on the next best piece. For many collectors, there is nothing like owning a one-of-a-kind conversation piece that looks and feels like functional art.

At Cloud 9 Smoke Co., we recognize the time, energy, and talent that goes into making a stellar water pipe. Each glass artist in our curated collection has toiled in the heat and along with their blood, sweat, and tears of have emerged as true, visionary and cultural artists.

So, why besmirch someone's talent and creative vision and hard work with the word “bong”. Sure, we aren't going to judge you if you still use the word bong! Nothing wrong with that -- but when you spend your hard-earned money on something so unique and special, the word “bong” just devalues it. Put that in your water pipe and smoke it!